Well, here we are over two years into a worldwide viral pandemic, but when it comes to the prevention of death/severe C19 using safe, cheap and effective treatments, it sure feels like groundhog day.

Yet another study on vitamin D confirms that pre-existing levels are pretty good at predicting who gets really ill and is at risk of dying and who gets it mildly.

Given that we are all going to get it at some point, if you are vulnerable in any way at all, I would have hoped that the government would have a vested interest in reducing death & severe C19 infections in any way they can.

Sadly they are actually stopping the free vitamin D they were giving out, all be it in very low doses, physiologically meaningless doses.

A study from Israel which has access to patients’ vitamin D levels after they had been diagnosed and treated for C19, went back and looked at who got it the worst.

I liked this study because they clearly understand the biology of what they are studying from the way they categorise the levels of vitamin D.

Too often, studies use blood levels that lack the nuance of levels that are deficient, insufficient or optimal.

Why is this important?

Well clearly those with gross deficiency under 50 nmol/L (20 ng/ml) are going to be at highest risk if vitamin D is a key player in immune response  to C19.

But at what point do the immune benefits max out?

Many labs and scientists will consider this “normal” or “adequate.”

But we know that people living and working in sunny climates all year round have levels in the 100’s. 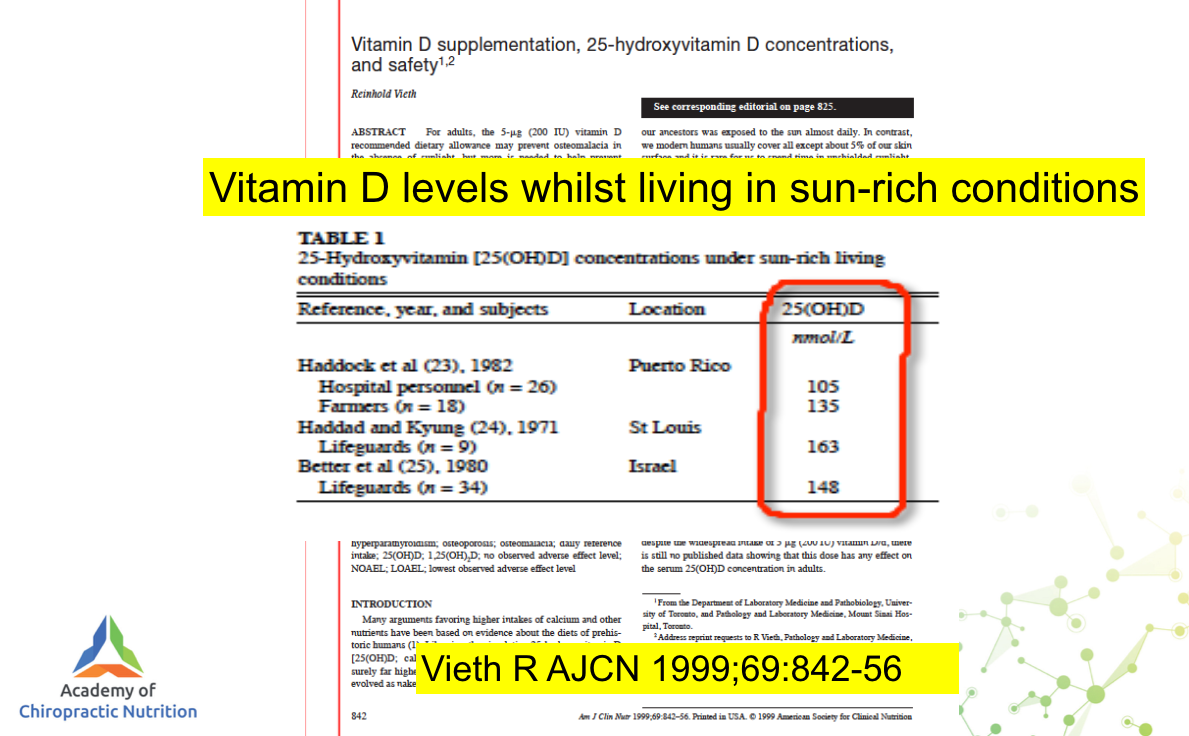 Remember, your body turns skin production off when it has enough. You cannot get toxic from endogenous production.

Clearly, if all we needed were levels in the 50’s, no one would ever get into the 100’s with natural exposure.

Once you get into the 100’s, suddenly we start to data showing huge drops in cancers, MS, CVD and all-cause mortality.

These authors get it and divided the patients up accordingly:

Then they retrospectively went back and assessed the patients severity/death rates associated with vitamin D levels.

Let’s think about that, vitamin D deficiency means you are x14 more likely to end up with severe/critical disease.

No one in the mild group died, in the critical group 84.6% died.

Now, association does not always equal causation, and older people have less vitamin D because their skin loses the ability to make it compared to younger people.

But we do know that certain groups are very prone to bad outcomes from C19, especially the very old (over 70 years old), the obese and anyone non-Caucasian.

Now, what do these groups all have in common? 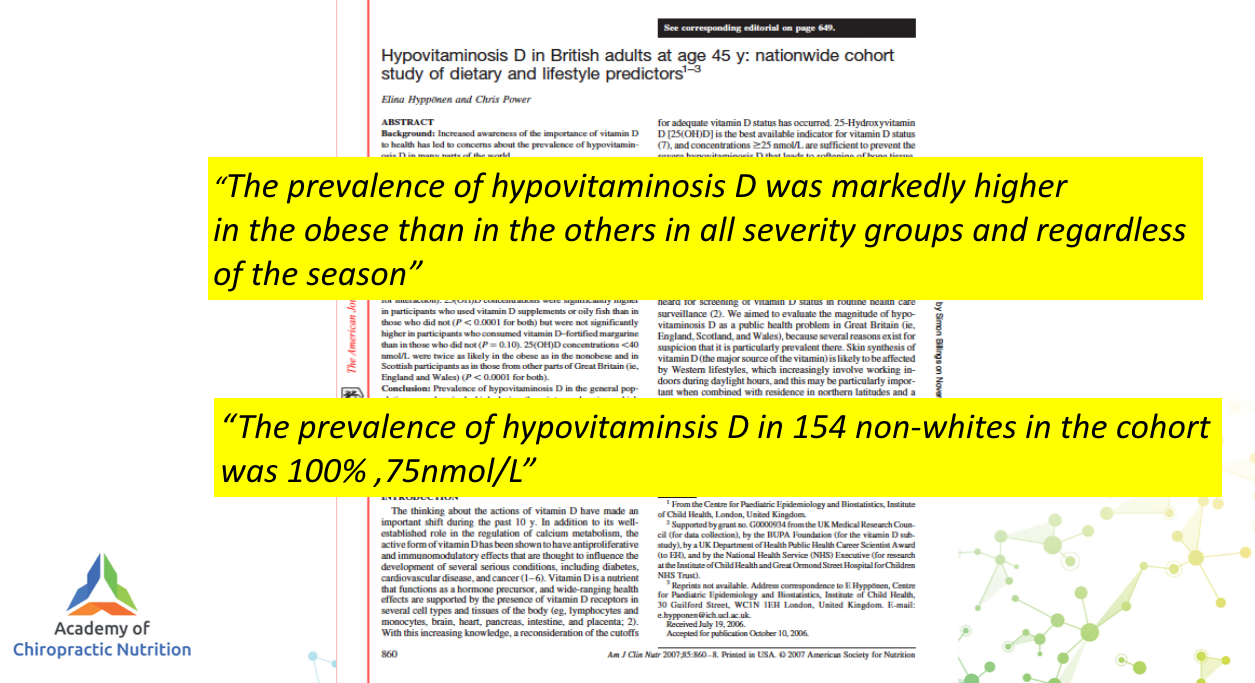 So can we definitively say that vitamin D could stop many people dying of C19?

But we can say that in the winter, on average 46% of the UK population are deficient with rates far higher in the elderly, obese and non-caucasian. 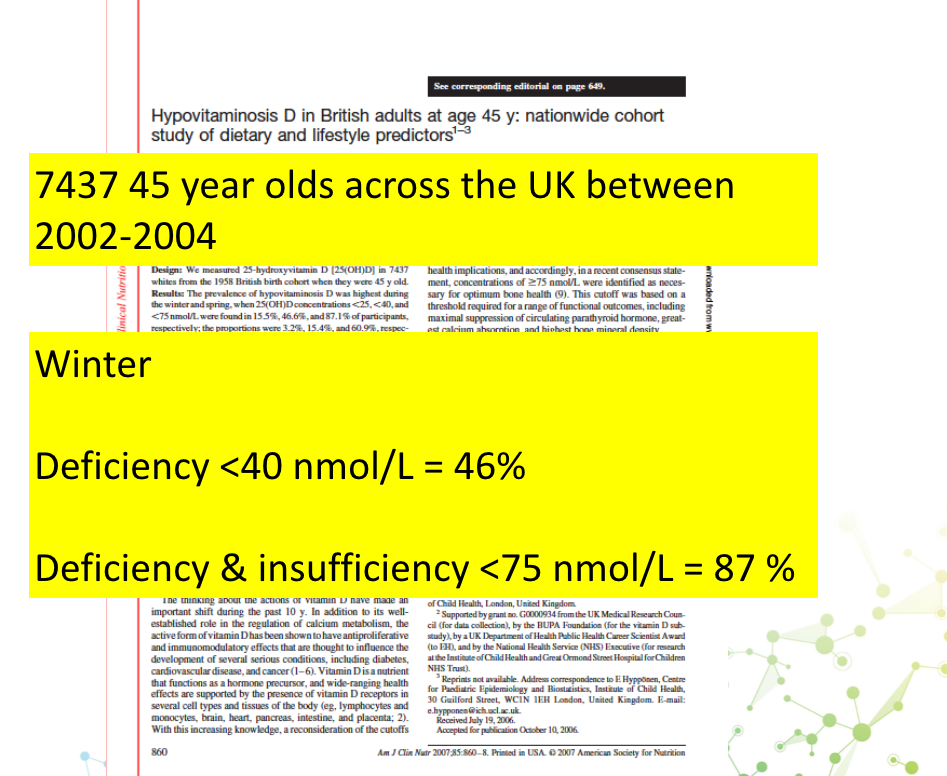 15 years later, can we ethically leave huge numbers of vulnerable people deficient in a steroid hormone known to have a profound effect on the immune system?

A simple supplement that is incredibly cheap and safe?

I would argue no.

In fact, I would argue it is supervised neglect on a national level and potentially corporate manslaughter.

We cannot treat vitamin D like a drug when it is an endogenously produced steroid hormone.

Nor should vitamin D be given in isolation for C19 or indeed bone health.

That is done in RCT’s with drugs (because drugs are powerful and can supress a symptom or system without addressing to the root cause) but in clinic with an understanding of the web-like interactions of the metabolic system and we are trying to maximise health and immunity, we do not give one thing.

Certainly, giving vitamin D in the longer term without 150-200 mcg of vitamin K2 in the MK4 (menaquinone-4) and MK7 (menaquinone-7) forms is potentially asking for lower bone mineral density than ideal and a higher risk of cardiovascular disease. 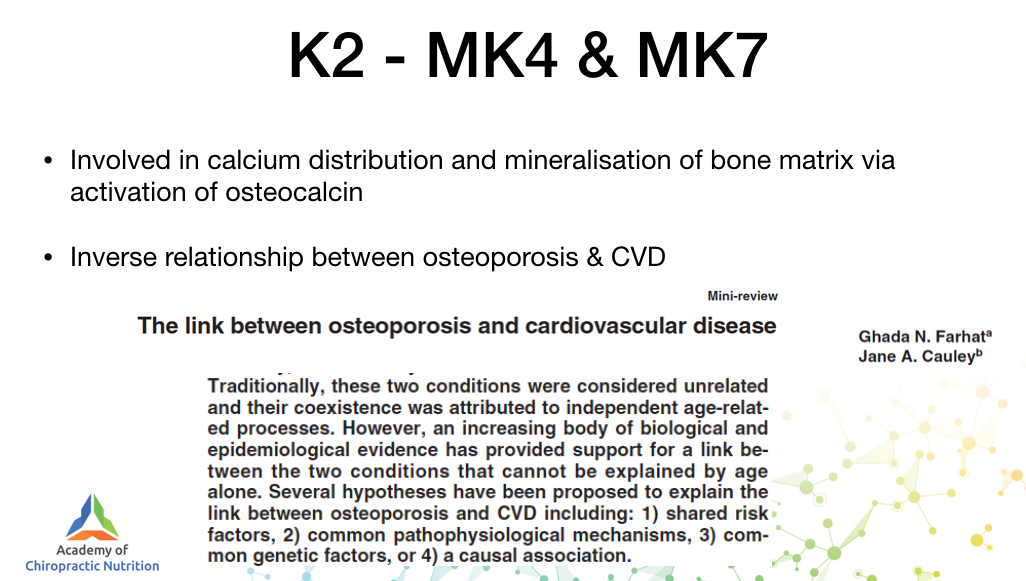 Remember the vast majority of research using vitamin K2 as an intervention for BMD and fracture reduction is all done using the MK4 form not the MK7 favoured by 99% of supplement manufacturers. 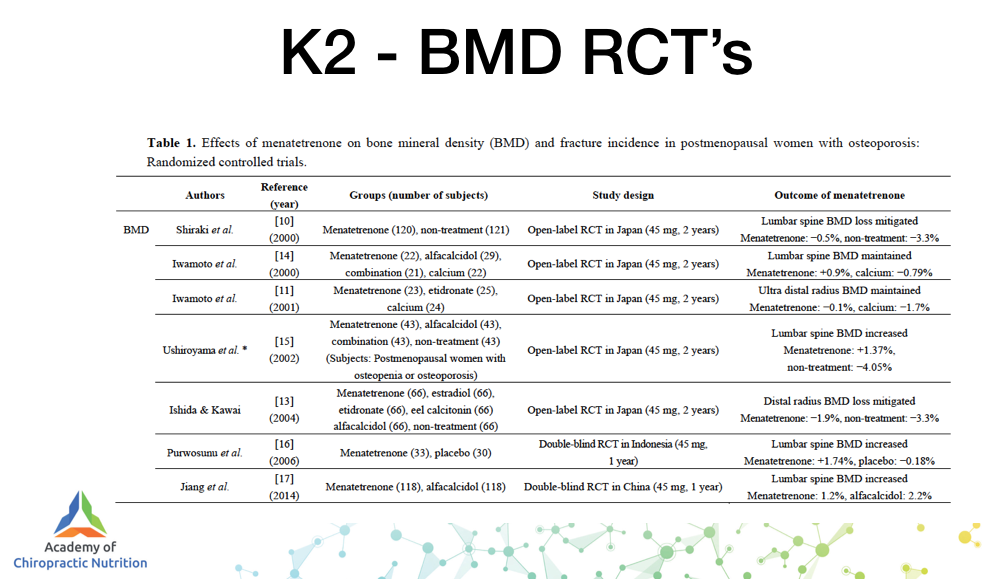 How do we know the sublingual works for superior absorption?

Because we tested it.

We measured the vitamin D levels of a patient on 400 iu of liquid vitamin D3 with active crohns disease then swopped him to our sublingual 4000 iu. 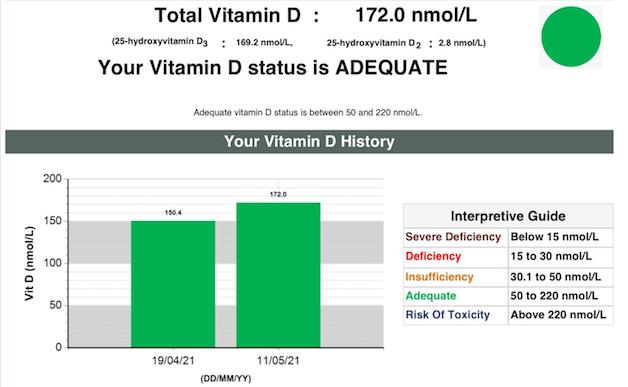 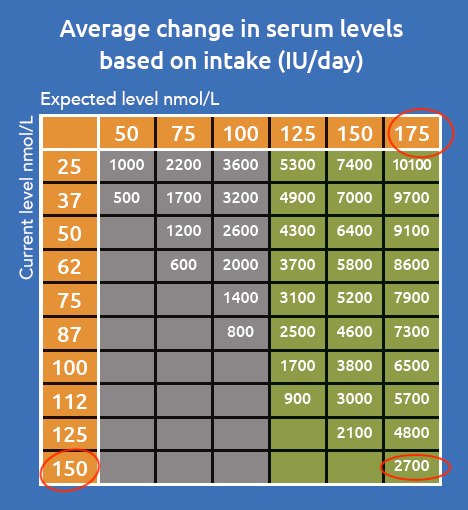 We also tested it on patients not on vitamin D. 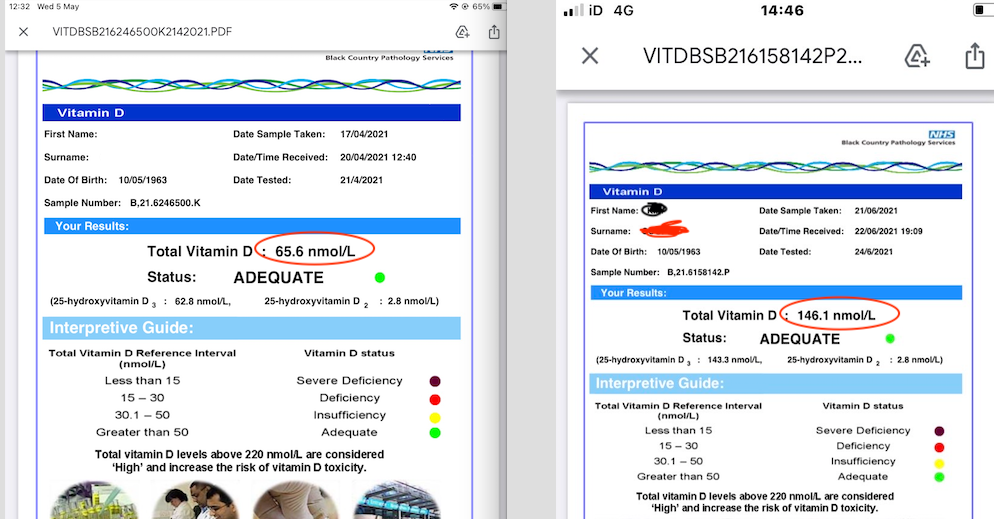 This stuff works and your patients have the right to optimal health.

– Check your label on any vitamin D and K2 products you are taking or giving to patients, you need 150-200 mcg of K2 in a mix of MK4 (the form found in nature, and found in all mammals breast milk to nourish the young) and MK7 (which is effectively a back up for MK4).

Obesity patients need double the dose, that is the number one cause of non-response to supplementation. 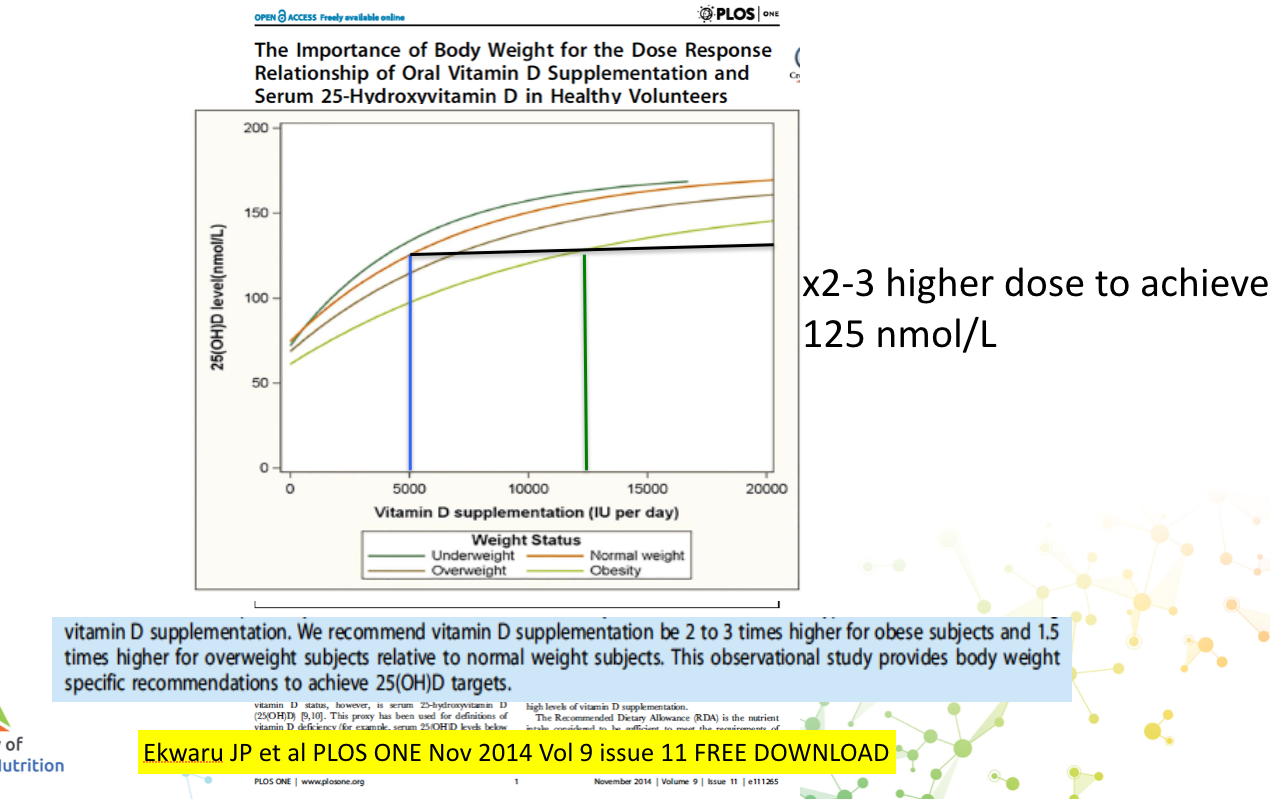 –  All the slides in this are taken from the course and we will be opening up again in the next few weeks.

Is 2022 the year you join the evolution of Chiropractic/Osteopathy/Physiotherapy and take your results to another level?