Why our immune system becomes in-tolerant

Last week we talked about the gut microbiome and how it might be one aspect of why some people cope with COVID-19 and some do not.

Tolerance specifically against you.

This week I want to show you a real life example of when it goes badly wrong.

A few weeks ago I consulted with the son of an existing patient, lets call the boy Fenton, because, well….. thats his name.

Anyhoo…..Fenton is nine years old and his wrists have really been sore recently.

The GP diagnosed tendon issues, but he was really having issues putting any pressure on them at all.

Then they got to see a Rheumatologist and has a clinical diagnosis of juvenile idiopathic arthritis (JIA), which is fancy latin doctor talk for he is really inflamed in the wrists and we don’t know why.

Then they ran some blood in preparation for his steroid wrist injections and two years of methotrexate.

They founds very high levels of immunoglobulin A (IgA).

Interestingly normal, though not optimal levels of the inflammatory marker CRP.

They screened him for coeliac disease, using tissue transglutaminase (tTG IgA), which was negative.

He had raised eosinophils which are part of your white blood cells.

They even questioned why that might be and flagged possible foods and parasites.

So it was time to go looking for the root cause of his immune system intolerance which was creating his “JIA”.

Your immune system doesn’t just start spitting out IgA all over the place, and cranking out eosinophils by mistake, it has detected a perceived threat and his wrists are getting caught in the cross fire.

Maybe, just maybe, we can avoid the need for methotrexate.

Now luckily for me (and Fenton) I have a head start, because his Mum and his sister were also patients in the last few years and both of them are wildly sensitive to gluten.

If you have total villous atrophy (a grade IIIc marsh classification if you want to be specific) it is around 96% reliable.

But if you are still in process of destruction it can drop down to 30-50% and if there is just inflammation and not destruction it rarely shows positive. 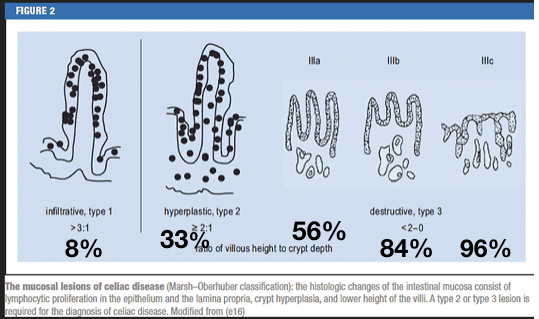 Given gluten sensitivity is genetic via the HLA DQ2/8 gene, it is not a big stretch to think maybe Fenton has a problem with gluten.

Plus he had raised IgA levels, maybe they were after a food? Gluten? IgA anti-gliadin? maybe something else?

Well luckily for Fenton, his Dad is minted in a way I find hard to comprehend (he gets bored on holidays and instead of swimming or reading a book, and buys lamborghinis and houses whilst wondering around Dubai).

So we tested his blood for IgG against foods (Note: had we been able to ideally I would have run a blood test that had a mix of IgG and IgA markers against food protein but we needed a finger prick so this was not an option).

Fair to say that what came up is pretty much what he eats.

So, those foods are all triggering his immune system.

With that many he has gut lining like a colander, this many foods is a symptom of a very permeable gut lining.

Note on the NHS test that flagged possible foods allergies and parasite as a cause of the raised eosinophils, but did they/were they going to look for parasites? No.

But we did via a DNA based stool test.

Yes he is missing some keystone butyrate producers which is not surprising. Fenton was savaged by a dangerous dog last year and nearly lost his leg.

He was loaded with antibiotics for quite some time in the recovery which carpet bombed the good bugs and bad.

But yes he does have a parasite and a nasty one too.

So far we now have two clear causes of his auto-immunity, food reactions and a parasite.

Note that gluten is really unique, it has the ability to make your gut produce a molecule called zonulin.

Zonulin opens up the tight junctions in the gut (makes the gut leaky) and allows other foods, toxins, bacteria to pour into the blood creating a sustained inflammatory response.

So treatment is ongoing (and I am waiting a urinary organic acid test) but I am optimistic we can avoid the need for such a potent drug as methotrexate.

It is possible he will still need it, we cannot allow his wrists to be permanently damaged.

But the steroid injection has reduced the inflammation and given us a window of opportunity to dig out the root causes and see if his immune system will settle.

Now while this is a full on functional medicine case not a Chiro/Osteo case per se, the concepts that underpin the treatment are exactly the same as the ones I use in my Chiropractic practice and thus what I teach in the Core Concepts in Chiropractic Nutrition course.

We look for “primers” of the immune system, that make it hypersensitive to the “drivers” of a sustained low grade inflammatory response.

That inflammatory response is part of what then creates a “priming” of the nervous system (along with nutrient deficiencies) to create a hyper-sensitive nervous system to neuro-mechanical dysfunction and connective tissue failure both macro and micro.

We are all about the interface between the neuro-mechanical system and the metabolic system. 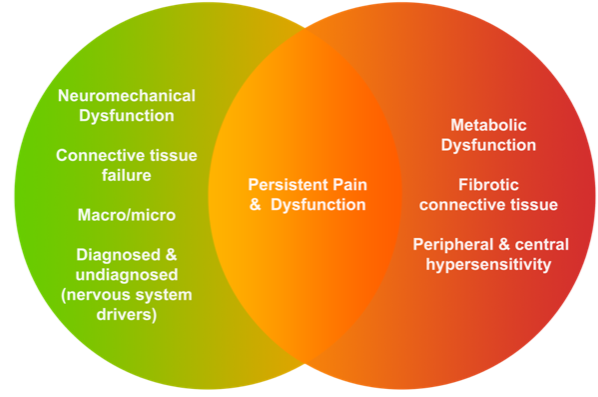 This is nutrition for Chiropractors and Osteopaths that still want to be just that.

To allow your care to give results that are both significant and sustainable.

We all have out success stories to tell, but what about the ones that don’t get better?

This is the evolution of Chiropractic & Osteopathy.

Last week, I had a chat with Simon King developer of the excellent Afferent Input all about the wonders of glycine.

I made his members an offer on the Core Concepts in Chiropractic Nutrition and I will do the same for you.

The course is about 85% complete and I will be putting the prices up when it done.

The current intake have been getting amazing results and upgraded their knowledge.

“This is definitely the best CPD I’ve ever done. Has transformed how I view many pain patients and I’m getting even more better results than ever!”

“Even after 30 minutes of studying the core concepts of chiropractic nutrition course I had some usable information to completely change patient’s lives and treatment outcomes. Simon’s course is compiled in easy to digest chunks that are engaging and fascinating, but most importantly relevant to chiropractic healthcare. As far as I’m concerned, this course is a must if you have any desire to understand the mechanisms of good health.”

“Simon has put together an amazing course to help those difficult cases that just don’t respond as well to mechanical care as you’d like. Often the missing link is the nutrition, either a deficiency or toxicity driving an inflammatory response from their diet. He’s knowledge around nutrition and functional medicine is brilliant and he’s a master at breaking down those complex subjects into easy to understand and clinically relevant nuggets. Has definitely helped my outcomes with those difficult patients and increased my referrals.”

“If want to take your practice to a new level and stand out from your competitors this course is a must. Simon Billings has seriously raised the bar in how he presents his course on Functional Nutrition, I highly recommend this.”

We are building a tribe of neuro-mechanical practitioners that are leaders in our professions, are you ready to join us?