This week I have been taking a well earned break from clinic for half term with my wife and kids.

We have been climbing, playing in fords, body boarding in massive sand dunes, jumping off sand dunes, swimming and chilling.

All of course while soaking up some delicious and joyful UV rays, producing a truck load of vitamin D.

In as little as 30 minutes we can make 10,000-20,000 iu, but remember the whole point of suntan lotion is to block both UVA and UVB and it is the latter that makes vitamin D in the skin from a form of cholesterol.

Patients these days are all onboard to getting some sun, but the idea that you have to do it with no lotion on, in the hottest part of the day, usually between 11 AM and 4 PM, it hard for them to get their head around.

It is literally the opposite of everything they have been told.

So as part of the IN Health supplement system we have produced a point of sale infographic which helps to explain some of these ideas. 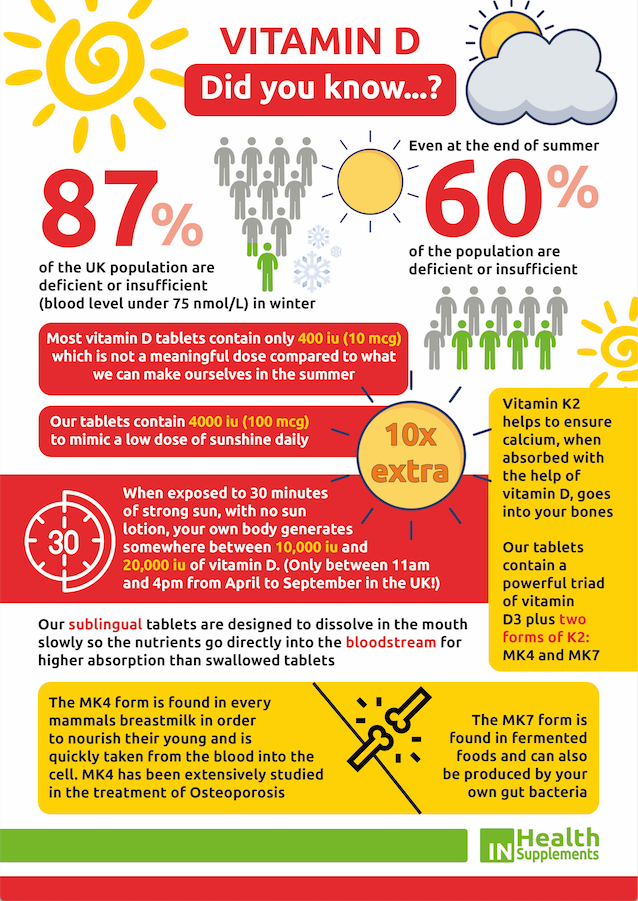 It also helps to explain the % of the population who are deficient or insufficient at the end of winter or even summer.

Plus gives context over the doses why the tablets you are selling contain 4000 iu (100mcg) rather than the usual shop bought ones containing 400 iu (10mcg).

Thus a little more expensive at first glance but because they have X10 the dose. Note they often are actually better value when you work out the per 4000 iu daily dose of 10, 400 iu capsules and especially when you add in another K2, even just the MK7 form.

Lastly it talks on the higher absorption of using a sublingual tablet. Simply tuck it between cheek and gum and it slowly goes straight into the blood stream.

One of my pet peeves is the boasting and broadcasting of “superior X, Y and Z” by supplement companies with zero evidence to back it up.

So, I put our sublingual to the challenge.

A patient of mine with Crohn’s disease, was already taking 4000iu of vitamin D in a liquid form (note this theoretically should be even better than a tablet).

He had been on 4000 iu for years so his levels will have plateaued and we tested him in April before any natural vitamin D production. Note he is on and off biologics for his Crohn’s and one side effect is he must not be unexposed to UV rays so gets little/no UVB even in summer.

Results came in at:

So clearly the liquid is working and working well.

Question was: Will the 4000 iu in our vitamin D product do it even better?

Remember he has been on 4000 iu for years, so if our 4000 iu is equally absorbable nothing would change, his levels would be maintained.

In response to supplements the curve is not lineal (ie a straight line), it is curvi-linear (ie the curve flattens off). 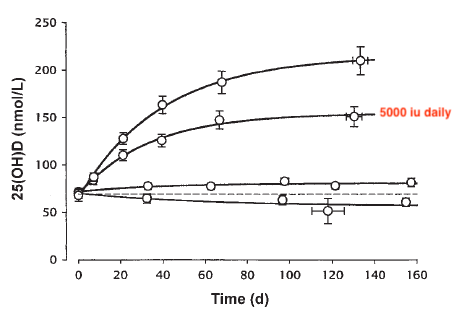 If it was less absorbable it would go down.

As expected it actually went up: 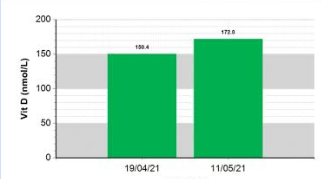 But for his to go up, means we getting more of the 4000 iu in the blood stream than the liquid.

Well let’s look at the dosing chart (which you sould all have downloaded and printed/laminated for your clinic). 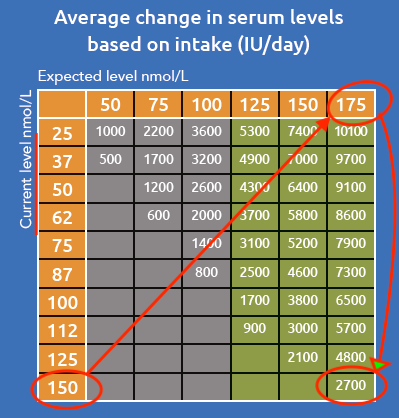 The vertical axis is where we are now, then look for the level we want to achieve on the horizontal axis and we can see we would have needed to add an additional 2700 iu to the 4000 iu already being taken to get to 175 nmol/L-ish.

So we can say that the 4000 iu sublingual from IN Health supplements is the equivalent of 6700 iu of liquid.

This is just the beginning of research to prove what we are all about:

All stuff, no fluff.

All killer, no filler.

If you have been interested in the vitamin D/K2 sublingual but didn’t want to buy in blocks of 10, we have added an option to buy a single pouch of 30’s or 60’s as a tester.

Understanding vitamin D and educating your patients is more important now than ever.

As vitamin D has gone really mainstream with the pandemic, more information is being fed to the public and not all of it is sensible.

As things become popular there is often a backlash against them.

Check out an article headline from the daily express today:

The headline is sensational but the text reveals something less so:

The journalist is quite correct, taking 60,000 iu daily is not a good idea, but patients struggle to understand iu vs mcg and will easily get scared of “high doses”.

Their frame of reference for that is the NRV/RDA which is actually a measly 200 iu (5 mcg). So when they see that 4000 iu is actually 2000% of the MRV, they might get scared. Note the journalist mixes up mcg and iu and suggests the government recommends 10 iu (she means 10 mcg).

The point of this is that you need to be the expert (adult) in the room.

You do not need to be a nutritional expert per se, you just need to know more than the patient and if you have read these newsletters then you do.

Use the dosing chart, use the point of sale material (see attached) and give them what they need:

High quality vitamin D, in a physiologically meaningful dose, in a highly absorbed format, with supporting K2 in both forms. MK7 found in fermented foods and the evolutionarily congruent MK4 which is found in the breast milk of all mammals on the planet.

– Download the attached infographic, print it, laminate it and use it – education is key. 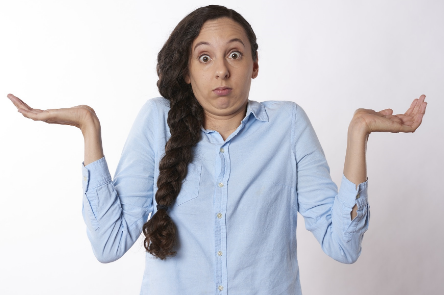