The creation of creatine is crazy

This week, we are going to keep it simple and talk about creatine.

It is one of the most widely studied supplements on the planet, widely used by those in playing sports, but there so much more to it than that.

You see, life is really all about energy, adenosine triphosphate aka ATP.

At the end of Krebs cycle and the electron transport chain we have net ATP production, but it does take ATP to make ATP.

So when we “spend” a phosphate group from ATP it becomes ADP (di-phosphate), we don’t want to have to start all over again and make it from scratch so we recycle.

To do that creatine hands over a phosphate group and voila you have ATP ready to go again.

This is so important to our health that a whopping 40% of a complex metabolic pathway called methylation is devoted to making creatine.

This pathway is constantly in action millions of times a second and is how we make myelin (think pain thresholds), turn neurotransmitters on and off (depression/anxiety), detoxify oestrogen (think PMS and breast cancer), make melatonin (for sleep), remove histamine (think hayfever and anxiety), make DNA for new cells (errrrr….do you need me to point out why this is important?) and loads of other good stuff.

We need B12, folate and B6 for this cycle to spin and produce the good stuff.

So we can make our own creatine, about a gram a day by combining glycine (my favourite amino acid of all time – I know your not meant to play favourites but it’s like your kids isn’t? You’re not meant to have a favourite but secretly we all do….), arginine and methionine.

You can also eat it, but it is far, far higher in meat so vegetarians have less in their diet. Note vegetarians tend to have less B12 in their diet which can also predispose to less methylation (and thus creatine made) though in my clinical experience they tend to know this and thus are more likely to supplement which negates the B12 issue as long as their digestion is decent.

So if we supplement someone with 5 grams of creatine, we could theoretically improve their energy by recycling ATP more and increase methylation of stuff other than creatine?

You certainly could (and you should).

It improves cognition in vegetarians (not omnivores).

I suspect (and there is some research) it may also help elderly patients who simply have reduced nutrient absorption and thus less methylation via less B12, folate, and B6 and thus less creation produced.

It also improves depression nicely, check out the study below, 5 grams of creatine plus SSRI beats placebo plus SSRI in major depression. 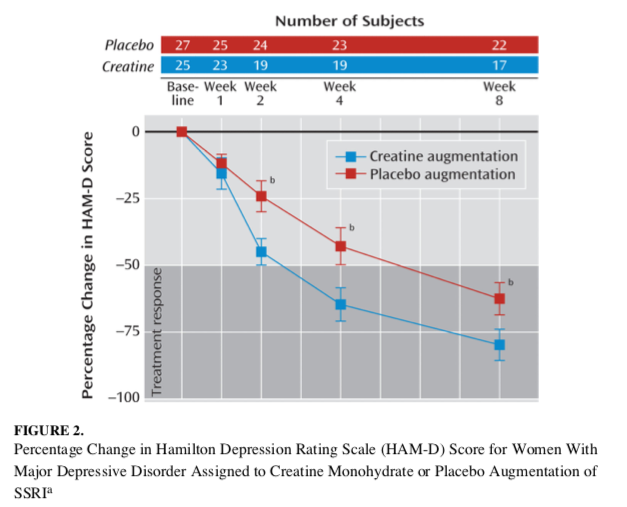 Creatine is overwhelmingly safe, it is cheap and mostly very well tolerated (occasional nausea or diarrhoea).

The only tricky part if trying to explain to the elderly & depressed why you are suggesting they buy a sports supplement.

I will resolve this in the summer once the course is 100% complete. I will then complete the patient education video library (currently called IN Health System) which is sister program to the Chiropractors course.

Then you can simply send them a link and I will educate them for you, simple.

If you want a taste of that, check out the three, five minute videos on vitamin D. These are currently hosted on my personal clinic site but the whole library of videos will be on a bespoke site in due course.

Before I sign off for today, if you have been on the fence about jumping on board with the CCCN course, tonight is your last opportunity before the doors close.

To make it even more tempting, I have now added a third payment option which allows you to spread the cost over six months at only £200 a month.

And remember, you could earn back your course investment via commissions earned on nutritional supplements within 12 months without ever holding stock. It’s all in the course and I’ll teach you exactly how to do it.