Did you know that the first randomised controlled trial was done in 1747 by naval surgeon James Lind?

Back then scurvy was a killer.

On May 20, 1747 he divided the 12 sick sailors into six pairs, and provided each of them with a different supplement in their diet (with sailor response added for historical accuracy):

vinegar – “where are my chips then?”

purgative mixture – “when you say purgative….”

sea water – “have you run out of ideas or something?”

He noted: ” they all in general had putrid gums, the spots and lassitude, with weakness of their knees. Being together in one place, being a proper apartment for the sick in the fore-hold and had one diet common to all. “

Due to the vitamin C in the citrus fruits, the 2 sailor taking those were back to full health in 6 days.

In fact, they were so much better were appointed nurses to the sick sailors.

Now I’m no fan of the RCT’s in general.

Do we want to practice average care or personalised care?

To me it’s a statistical slight of hand (job) most of the time.

But I recognise they can be useful in terms of acceptance within the broader medical community and media.

I guess we have to play the game to help more patients in the end.

They have a place in the world of functional medicine, though again they have to interpreted/implemented within the context of the individual case.

Now academics and medics in general just love the Evidence Based Medicine (EBM) stick to whack other professions/colleagues with different views on the head with….“what’s the evidence for that?” (is the call of the clinically inept in my experience)

It’s meant to be a patient centred thing with patients views and wishes respected…….yeah right, good luck with that at the GP surgery next time your cholesterol is up and it’s cholesterol target bonus time.

Plus the clinicians’ experience and then the evidence base.

In reality, the former two can do one.

This is the era of statistics based medicine.

And they are not.

The simply had recovered and it was sodding obvious.

It would have also been obvious the other didn’t.

If you have to use clever statistics with P values to work out if the patient has a “significantly improved”, FYI they haven’t.

We are made of collagen – our fascia, tendons, skin, ligaments, meninges, bones, it’s all collagen.

And we take a load of amino acids and there is lots of clever stuff happening, but the key bit for us is enzymes that helps the formation of collagen. (prolyl hydroxylase & lysyl hydroxylase if your interested, defects in these may be involved in Ehlers danlos syndrome EDS)

These are both ascorbic/vitamin C dependent enzymes.

So no vitamin C – no collagen.

One of the classic features is bleeding gums and then teeth falling out.

Why? Because the gums are highly vascular and have very small capillaries which are wrapped in collagen to prevent rupture.

So when you can’t make collagen well, it’s one of the early warning signs.

So look out for bleeding gums it might explain why your patients are not responding to care and healing – they can’t make collagen quick enough to repair that – ligament, tendon, etc (insert tissue here).

Persistent dysfunction/pain and poor healing are not a green light to keep doing the same thing to your patient.

It’s feedback that something is missing and you as a clinician (not a therapist) must look again.

The best source of vitamin C – fruit and vegetables every time.

Remember that vitamin C is a key part of your anti-oxidant network defending you against oxidisation via free radical damage.

So if you do especially stupid things that crank up your oxidative stress like smoking, you are going to need more (or you’ll end up looking like Shane MacGowan) 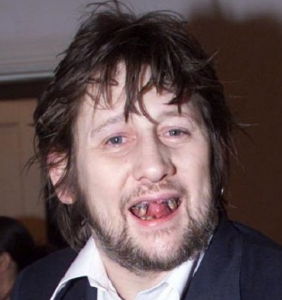 Have a good look at your patient’s gums and consider this in the context of their symptoms, response to your care (and previous care) and lifestyle.

Encourage all your patients to eat more FRESH fruit and veg.

Don’t drink sulfuric acid or seawater if your gums are bleeding (ever).