Tony Blair has quite the legacy.

Leaving aside his penchant for starting illegal wars, one of his biggest changes was to flood GP’s surgery with money (1 billion to be exact).

This resulted in a 50% pay rise for GPs (with less hours), but they were hitting their targets even higher than anticipated and so the treasury had to fork out another 400 million.

So they tightened the screw and for higher “targets” to reach for.

Tricky bit is those targets are surrogates for health, but not actually health per se.

Thus, war was declared on cholesterol, blood sugar levels and blood pressure, this was the age of prevention.

So from 2004 prescriptions for cholesterol lowering medication went up around 700%, over 200% for diabetes and nearly 300% for “high” blood pressure. 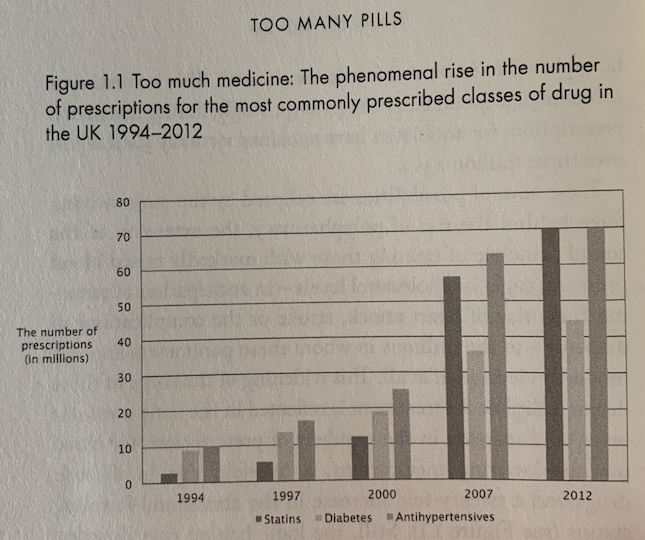 So what is the end goal of these colossally expensive medications?

It must be to reduce death and morbidity, otherwise what is the point?

Plus we need to take into account the side effects of medications and be cognisant of drugs interacting in the so called poly-pharmacy (they do not test medications in combination generally).

This is exactly what Trewby et al examined.

But before we dig into the methods and results let’s just re-cap on statistics (I’ll make it easy I promise).

Let’s pretend we have 100 people who have never had a heart attack (primary prevention) and they all take a statin to lower their “high” cholesterol.

And another matched group who take a placebo.

At the end of 5 years we analyse how many died of all causes, excluding trauma. That way we can include potential side effects killing us by things other than heart disease, and if there is reduction in heart attacks and that does reduce death we should see it.

Note drug companies will generally use heart attacks on their own as their only marker for “success” for obvious reasons ie if the statin gave them cancer you can remove them from the study.

So let’s say that the placebo group, had 3 heart attacks. So straight away the challenge here is they had a 97% chance of being just fine with no intervention. Or put another way, even if they took the real drug and it was 100% effective in every case (never going to happen) they will have a 3 % chance of benefitting from the a drug, pretty crap odds.

In the statin group, let’s say it dropped to 2 heart attacks.

You could also use another statistic called a number needed to treat (or NNT) which means how many people were treated to stop one “event”, in this case a heart attack.

In this scenario you would need to treat 100 people for 5 years to stop one heart attack, thus statins would have an NNT of 100.

But the reality is that is a hard sell to patients (and Doctors) which is what we will see later in the study by Trewby.

And bear in mind we are still using one heart attack as the end point, not death of all causes excluding trauma.

So the drug companies use the a different way of expressing the results, a way that is far more impressive to everyone.

They argue that if you are in the 3% group that would have had a heart attack, then the reduction from 3% down to 2% is RELATIVELY a third and thus a 33% RELATIVE risk reduction.

All of a sudden we are looking pretty impressive, aren’t we?

But the reality is this is a meaningless statistic.

Patients cannot know if they are in the 3% heart attack group or the 97% group that had no issues and so in my opinion this is a deliberately misleading statistic.

Sadly this is basis for the regulatory approval and sale of almost all preventative drugs that are taken.

Even the single digit figures of absolute risk reduction are for heart attacks instead of all cause mortality, because when you use the latter often the benefits disappear all together.

Group 2 on meds no cardiac history

Group 3 no meds and no cardiac history

They were asked to consider if their cholesterol was high and they were offered a “safe drug” which could help reduce the chance of a heart attack.

Note not death of all causes, this is important because they told them the drug was “safe” thus they are not considering any risks of taking a drug so this is a slightly unfair question in my opinion which increases the chances of people agreeing to take drugs.

They used the diagram below. 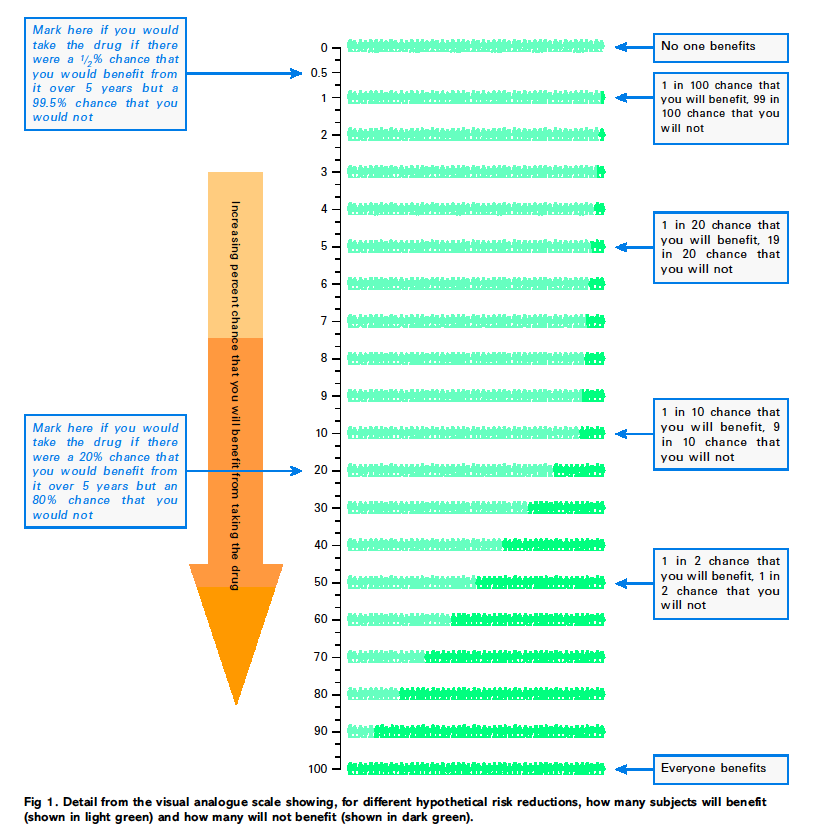 They were subsequently interviewed and they want to know if the chance of benefit was less than 5% (absolute risk reduction) how many people will still take the “safe drug”.

Not surprisingly the recently released from cardiac unit group had a higher % at 32.4, while the healthy and on no meds (group 3) were at 21%.

From my point of view still a bizarrely high figures in groups 2 and 3 and I wonder if that is partly due to the lack of risks being discussed and the lack of alternatives being presented. Weird, crazy stuff like regular exercise and eating healthy food, that kind of thing.

Regardless given the majority of patients are taking statins for primary prevention, if patients were presented with facts in an understandable way we would be looking at 80% less prescriptions for statins.

But in reality the 5% is larger than the actual benefit from statins even for heart attack, not even all cause death.

The figures for that vary depending on who you read, if read independent reviews they are much lower.

From the www.thennt.com site, see what they say about people with low risk of heart attacks, presented as an NNT, both heart attack fatal and non-fatal plus all cause mortality.

They also look at statins for people with no previous heart issues but include those with higher risks.

At 0% reduction in death, I think that is a pretty hard sell for even the smoothest of GP’s.

But let’s give the drug companies a chance to shine, let’s see how preventive statins are in people that have already had a heart attack, by definition they must have a much higher chance of stopping heart attacks (and death), right?

Well, kind of, but the benefits are still thinner than my hairline.

The best they can do is a 1.2% absolute reduction in the risk of death even in those with previous heart issues.

One really odd figure from the study is below:

Around 20% ish of patients simply did not want to know the chance of benefitting from the drug, how strange!

This ties in with another fascinating finding that suggests patients have a remarkable degree of faith in their GP’s.

When asked if they would take the same drug if recommended by their GP, the figures go up dramatically.

The tragedy of this in my opinion is patients believe that GP’s are operating in a vacuum that is independent of finances and reward.

The reality is they get paid to reduce cholesterol.

Yes they could give diet and lifestyle advice in the 8 minutes they have and hope the patient sorts out a lifetime of bad habits. But why risk missing out of your bonus when you can just give them a statin and know it will come down?

This is all tragic for both the patient that is paying for poor care and the GP’s who now have relatively little autonomy and are now more akin to pharmacists with medical degrees.

– Check out the excellent “Too many pills” by Dr James Le Fanu and understand the mess Tony left us in and always keep copies in clinic. 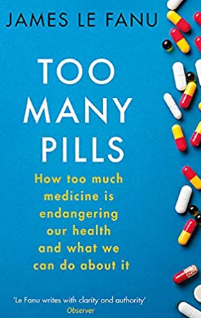 – This knowledge is precious but many patients do not want to hear it,     especially the older generation. You cannot force someone to swallow the “red pill” of reality, some people are very happy living in the matrix.

Tread carefully, but use it when appropriate.

– Check out once upon a time in Iraq on BBC, an amazing 5 part series about what we did to Iraq and the world, and once again understand the mess Tony left us in. This really had a profound effect on me.