Quite a few years ago a well established Chiropractic clinic near to where I practice was bought by an unnamed group. The single-owner had been there for around 25 years and had a solid patient base.

Two brand new shiny and enthusiastic graduates were placed there to much fanfare with an extensive advertising campaign (they even did radio ads and everything).

Now I am all good with competition, in fact my favourite patients are those that have seen other Chiropractors/Osteopaths first.

But when the said new uber grads went back to their college of graduation and explained to the students they were the best Chiropractors in town because they were “evidenced-based”, I knew there was not going to be any competition at all.

You see, proclaiming yourself to be “evidenced based” is trying just a bit too hard & screams of insecurity.

It’s like those extreme religious group pastors in the USA who hate gay men & claims to be able to cure them by doing really “masculine” activities, like shooting defenceless animals from 500 years away (I can feel my heterosexuality rising up just thinking about the slaughter).

Then later it turns out the were gay after all and were just trying to cover it up (it is called projection in psychological terms).

The concept of evidence-based medicine (EBM) came about in the late 1980’s/early 1990 and in principle is a great idea.

One of the leaders of this movement was Dr David Sackett described it as “integrating individual clinical expertise and the best external evidence”.

That sounds good to me, in fact I’d say it was common sense to take experimental data, and apply it to the individual patient and their bespoke issues, wants and desires based on my own clinical experience.

At the top of the evidence tree is randomised controlled studies (RCT’s) and their bastard offspring, meta-analyses and systematic reviews (of the RCT’s). RCT’s are positively loved by the drug industry and revered by the medical community like a favoured child.

Next up are epidemiological studies, they still command respect, mainly because they have lots of people in the sample size (in case you haven’t read cosmopolitan, size does count). But they are riddled with error and bias and frankly not terrible reliable (a bit like a middle child).

Below that you have uncontrolled trials, case studies etc, but in the EBM world, these are deemed pretty much worthless hearsay and you may as well start dangling crystals over patients if you try quoting any of that.

The challenge is “integrating individual clinical expertise” has pretty much gone, and we are left with “guidelines” (derived from the evidence). Guidelines are good in principle but in reality, they actually became mandatory protocols and the clinicians “individual expertise” is irrelevant.

The reality is that what started out as a good idea (and let’s be fair has lead to some improved outcomes in some areas) has been hijacked by the drug industry.

The “where is the evidence” slogan is like a stick to attack anyone practising in a way you don’t agree with.

If you want to p**s on someones therapeutic fire, simply review the data, make your criteria for success with an intervention tighter and tighter, throw out anything not double-blind RCT, or anything funded but the group using the intervention (risk of bias) and hey presto you have “no evidence” but merely unreliable anecdotes which means you must be a witch doctor.

EBM is now like a religion with a dogma to preach and they will not be criticised or silenced.

statistics only based medicine.

But when it comes to statistics, we are playing a game that has lost any contact with reality.

Medical journals happily accept studies with meaningless relative risk reduction as an indicator of success. The shocking thing is the editors are well aware that it is meaningless in term of clinical results, but that is the standard the drug companies and the reviewer for guidelines have set for acceptance as a success.

Not to harp on and on about it but that is why the best selling drugs in the world are cholesterol lowering statins mainly prescribed for primary prevention. They offer a 0.5% absolute risk reduction in a non-fatal heart attack (or you need to treat 227 people to stop one non-fatal heart attack, an NNT of 217).

If you change the outcome to all causes of death excluding trauma you get 0% benefit.

I am not making this up, check it out below:

It is not just me that thinks this, in fact, in 2003 the “father” of EBM Dr David Sackett, wrote a spoof article in the BMJ laughing about the way in which the entire premise of EBM has been hijacked by the drug industry – How to Achieve positive Results without actually Lying to Overcome the Truth – HARLOT 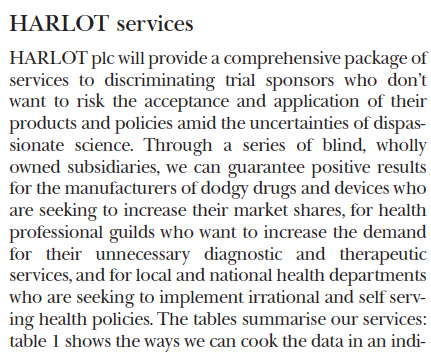 It really is worth a quick skim, the fact that 17 years ago the medic that sold us EBM is telling us it has been corrupted beyond repair, should give us all cause for concern.

I believe using the traditional principles of EBM is a good idea plus some good old fashioned common sense.

If you are results based, it doesn’t really matter how or why you do things, just measure something meaningful, treat, re-test, repeat.

–  Check out the book “can medicine be cured – the corruption of a profession” by Seamus O’Mahony, he is a gastroenterologist in Ireland and nails it.

– Next time you hear a practitioner talk about being “evidence based” just consider if they are the real deal or putting on a good show to cover up their own insecurities, the masterful clinicians have learnt to live on the edge of clinical uncertainty.