Ten years ago when my wife was pregnant with our first child, she received a pack from the GP surgery which included advice on diet.

I was intrigued to see what a standard GP’s diet advice would be.

Low fat? Use sweeteners? Eat lots of wholegrains and baked potato (it’s a vegetable isn’t it?).

I was surprised but pleased to note they suggested she avoid tuna.

Now you see the thing about tuna is, it’s a sodding big fish.

Big means it lives a long time and unfortunately we have polluted our seas/planet. So long life means big pollution and in the case of tuna it means mercury, specifically methyl mercury.

I had read all about it in the excellent “Diagnosis Mercury” by Dr Jane Hightower MD a few years before. She does a great job of explaining the issues around it, many of them political and financial. 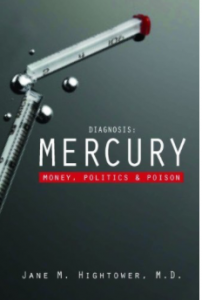 She also finds out along her journey that her colleagues, the general medical community and the government are not willing to hear the truth about one of the most poisonous substances on the planet.

How much you eat, plus your genetics for detoxification and your nutrient status, will determine how much you remove and how much builds up in your brain, liver, kidneys, muscle etc.

So the idea of mercury toxicity was always something I was aware of, plus I know how bad the inorganic mercury from amalgam filling is (check the videos below – it’s scary stuff)

But I had never actually measured it, and then I was chatting to a patient whom I had been helping with persistent candida issues, plus some cognition stuff and he casually dropped into conversation that he ate tuna four to five times a week.

This plus the release of a new test from Quicksilver Scientific (Tri-Mercury test) for mercury that could finally distinguish fish (methyl) mercury from amalgam (inorganic) mercury, plus hair and urine analysis and we decided to test him and see if the theory was a reality.

This patient had a few amalgams removed around ten years previously and had them done fairly well with a dam in place etc.

The initial result confirmed elevated mercury from fish and very low levels from amalgams, so far we were turning theory into reality.

He used the best detox money can buy from Quicksilver Scientific, liposomal glutathione (to grab mercury from the cells of his organs/brain/muscle), liposomal liver nutrients (to ensure they get packaged up and through the liver with bile), and binders (to bind the mercury in the intestines – 95% of bile is reabsorbed back for recycling, thus so too is any toxins in with it).

We re-tested six months later and the fish mercury was really starting to come out, we can see here a rise from the initial level of 5.48 (orange bar) up to 7.81 (dark blue bar).

No big issues, he is using saunas, coping with the detox no drama, we just held his nutrients at the same level.

I had also heard about testing hair and but blood finding no mercury at all in some patients (especially in the most ill and toxic) because they simply were unable to remove it at all. It was completely stuck in their tissue/organs and thus none would be found in the blood or hair or urine.

But I had never been able to test this, until that is we re-tested him.

This is his amalgam (inorganic) mercury.

Note here the orange bar is the original test at 0.092 and the re-test of amalgam mercury which he had removed over ten years ago has gone up 311% to 0.378.

If you watch the youtube video above on amalgam filling, you’ll understand this is now flooding out of his system – from his brain, liver, kidneys, muscles, one of the most poisonous substances on the planet.

To put this in context he didn’t have that many fillings and they were done fairly well.

Also is an Uber driven and successful business owner worth many, many millions.

He isn’t ill in the least, relatively speaking.

And yet he was highly toxic, so it really got me thinking about other patients with mouths full of amalgam and chronic illness/diseases. All the CFS, the MS, cancer, Parkinson’s, dementia, were they loaded up too?

Sadly this is not something you can suggest to your average patient, so I have followed up with a handful of Chiropractic patients and certainly found more elevated levels, but not everyone can afford the Quicksilver liposomal products and the new mercury test.

Someone who can afford it and needed it was Tony Robbins.

Tony is a brilliant speaker and a leader in personal change.

The 4th day of his Unleash The Power Within (UPW) is all about diet… I’m not sure who is advising him, but eating swordfish and tuna daily as Tony did, is as basic a mistake as you can make in the functional medicine/nutritional world, it nearly killed him, check the video with Quicksilver Scientific founder Dr Chris Shade PhD.

Check the Tri-Mercury test from Quciksliver Scientific via Regenerus Labs, this distinguishes fish from amalgam mercury, but it comes at a cost.

Other labs do very cheap mercury and urine tests, like www.biolab.co.uk, the fee is around £25, but it doesn’t distinguish the two types and has higher “normal” ranges, but it’s a good entry point. I would suggest challenging with liposomal glutathione for a week before testing to try and get some out of the system into the blood to avoid false negatives.

Tell your patients to reduce tuna to once or twice a month.