Back to the future (of healthcare)

Imagine if you could read a book now that would give you an accurate picture of the healthcare world in 50 years time.

Well, I was reorganising my book shelving in my study last week and I came across a book I forgot I owned.

Back in the Nutri-West UK days, we had an old school naturopath lecturing for us called Rod Lane ND.

He showed me an old naturopathic textbook. 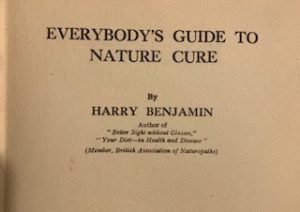 First edition was printed in 1936 and when I flipped through it a section entitled “The world fifty years hence?” caught my eye.

He takes a swipe at the medical professions rabid adherence to dogma (not much has changed there, and you could argue that on the Chiropractic side too….) Or as Dr Seamus O’Mahony says “Modern medicine is like the medieval church”

He also takes a humorous look at what the world of healthcare might look like in 50 years time (remember this was 1936).

He’s being ironic but here we are 83 years later and it’s not funny.

Well, I guess the medical world now no longer routinely remove tonsils, but they still have a tendency to whip out an appendix if the mood takes them.

At one point 1 in 8 men and 1 in 4 women had their appendix removed.

Rather than being an evolutionary has-been or as Darwin put it “a rudimentary organ”, the appendix is packed with specialised immune cells, molecules & of course teeming with bacteria.

Turns out it’s a safe house for bacteria, a nest egg of bacteria stashed away for an infected rainy day.

After food poisoning/infection the gut can re-populated with its own inhabitants from the appendix.

He goes on then to predict the “disease delusion” as Dr Jeff Bland calls it.

QUESTION: Ever wondered why your kids won’t do exactly what you tell them to do and deliberately annoy you?

FACT: It’s not your issue, they have a disease, it’s called “oppositional defiance disorder”.

Check out the symptoms:

The good news is you can give them anti-psychotics or lithium and they’ll fall in line (or fall over).

Ref point 8: If your life depended on finding a child who hasn’t been spiteful or vindictive in the last 6 months, you’re a dead (wo)man walking.

Hmmmmm….. could I get a disability badge if I’m extra annoying to my wife?

He even predicts the consistent rise in chronic conditions and the “normalisation” of illness & the relentless increase in prescriptions (300% since 2004).

He totally gets the way we work and the power if it.

But he knows that the power of combining nutrition with neuromechanical work is where it’s at.

And he can smell our bullshit even 83 years ago, I don’t think that much has changed….

The other thing that really caught my eye was the section on fasting.

Fasting is once again back in fashion because it tunes into our ancestral history: We evolved with fasting and many different cultures have recognised its inherent power.

Personally, I practice intermittent fasting daily (or time-restricted feeding), with an 16:8 split Monday to Friday. I break my fast (hence break-fast) at around 12-1 and eat all my calories in roughly an eight hour window.

You can do it the other way round too, with last meal around 3-4 pm.

I only eat breakfast at the weekends as it’s social family time.

Daily intermittent fasting is easy, sustainable and an actually make your life and routine simpler.

It also easily keep you lean, lowers blood pressure, insulin, oxidative stress and allows your gut to clean itself & heal.

Check out the research

Check out 16:8 fasting on the excellent diet doctor site

Try slowly increasing the time when you break your fast in the morning. Take a few weeks and see if with a coffee and lots of water you can slowly get to 12 pm.

Try and find a living human being that hasn’t been “spiteful or vindictive” in the last 6 months – it called being “normal”.