Are your patient’s suffering from sh*t life syndrome?

Picture this, 5 years ago… I arrive a few minutes early to the clinic but I have an extra emergency booked in at 8.

But the patient is earlier than I am.

I recognise the car and I know what she is doing.

Head in a bag and throwing up.

In the treatment room… “My necks out again, put it back in before I’m sick again…”

This happened quite a bit, and to be fair she had some significant TMJ issues, an awful history of sinus infections, plus meningitis when she was younger which partly started her headaches. In other words, I had plenty of neuromechanical issues to justify her symptoms,

I dabbled with her nutrition but she wasn’t keen and I’ve learned to respect a patient’s right to change their lifestyles now, later or never (in fact it’s one of the ACN core commandments).

I always want sustainable changes whenever I can get them, especially in the early phases of care but that just wasn’t possible with her.

Her mother and father were both patients as well as her two sons and her husband, so I knew her family well and saw her far too frequently for my liking.

But today, all that has changed because I basically only see her for related running issues and her headaches have virtually disappeared.

How? Well, I have to admit that it wasn’t anything to do with me.

It turns out that her husband was “an arsehole” (her words, not mine) so she kicked him out, got divorced, took up running, lost 5 stone and is now generally an awesome person.

I got so used to seeing her and focusing on my justifiable neuromechanical work and trying to get her to take a few supplements to help stop her liver failing under the weight of endless paracetamol (FYI it depletes glutathione your master anti-oxidant and if you run out your liver will fail) that I was blinded to the emotional side to her health.

So now that’s another core commandment of the ACN, to view the body through the triad of health – Physical, Metabolic and Emotional.

I thought of all of this after I bought a book called ‘Can medicine be cured? The corruption of a profession’ by Dr Seamus O’Mahony a gastroenterologist from Ireland. I am about a third of the way through, its surprisingly easy to read and I’m loving it so far.

I have made lots of marginalia https://fs.blog/2015/01/marginalia/, agreed with him on lots of things, learned new information and circled bits just plain wrong such as IBS – see photo for my comment and my explanation below in the P.S. 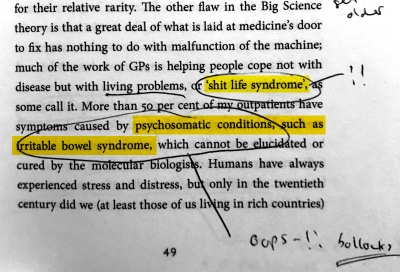 Its remarkable hearing a mature clinician look at the sad state of what is called “healthcare”. The reality is that at best it’s disease management and at worst it’s medicalising old age and poly-prescribing to anybody (including the healthy) once they turn 50.

But a particular line caught my eye and made me laugh out loud… he suggested that GP’s end up dealing with patients suffering from “shit life syndrome”.

I suspect there is a lot of that about.

It made me consider whether I would have done anything differently earlier in terms of the aforementioned patient’s emotional health and relationships?

Probably, though not definitely, no.

For me that’s beyond my circle of competence and whilst I did do the Neuro-Emotional Technique (NET) seminar twice with Dr Scott Walker (“in life there are only two things, money and love”), it’s just not something I am comfortable with and I doubt she would have appreciated me passing comment or advice anyway.

What I might have done differently though was to try to get her to be more active, ideally where there is a community around it, which might have indirectly helped her achieve change quicker in her personal life .

I have found that getting patients to get involved with anything where there is a community/tribe around it really gives them meaning. The islanders of Okinawa, famous for their longevity, have a word for a social support group or circle of friends called Moai.

I guess sometimes you just have to support your patients the best you can with good neuromechanical care and lifestyle advice while they are facing tough emotional times.

Action to take today: Click here to print off the ACN Triad of Health and put it somewhere you will see while working with clients, maybe show it to them too?

And as always, don’t waste those valuable adjustments…

P.S. “IBS” aside from being the worst diagnosis ever, is usually a combination of ACN Trio of issues, which we (ironically) call FIT:

It is definitely not “psychosomatic” in most cases.