Are you on the (inflammation) spectrum?

“It such a relief to finally get some answers….” I am stood in the car park at clinic and a patient I saw for several years before lockdown last year has been back in and seeing a colleague (my waiting list is around 4 weeks at the moment).

She is telling me all about a recent consult with a Rheumatolgist.

“the consultant says I have rheumatoid, but not the disease…..”

I am somewhat speechless, because for months and months (and months) after I first started seeing her it became abundantly clear she has a sustained low grade inflammatory response occurring.

She was in the process of developing a named inflammatory condition, it just depended which tissues it damaged first and which latin name the consultant cared to provide.

And I told her so on many, many occasions, so it turned out had my colleague.

She was perpetually stiff and sore, especially in the mornings, with the same repeating pattern of dysfunction in the joints and soft tissues again and again (and again).

And she has a persistent sinus issue, really inflamed and when she had surgery was prescribed hardcore steroids, her symptoms completely cleared and her range of motion improved dramatically.

She also had gut issues (“IBS”) and when she did a hardcore laxative clear out prior to a colonoscopy her symptoms all significantly improved temporarily.

This plus the achy, stiff hands in the mornings, a largely poor response to care beyond short term symptomatic relief, certainly no sustained functional changes, all scream sustained inflammatory response.

We talked at length on and off about change of diet, removal of gluten and dairy (or a blood test), the possibility of a course of anti-microbial herbs to clear out pathogens in the gut plus some probiotics.

But at the end of it all, she just didn’t want to make the effort and was in denial about the whole thing. I provided care for symptom relief and kept my fingers crossed one day she would cross the threshold and take control of her health.

Core commandment 8 on the ACN course is:

I will not badger patients into lifestyle change, it doesn’t work.

But equally, I need to remind them regularly why they are not getting sustainable results form care as I would expect them to and they would want. Otherwise they eventually drop out dissatisfied with the results.

I felt irritated she clearly thought we had missed something the consultant had spotted when I had told her this muttiple times.

But what really struck me was the power of a label, a name.

The consultant has no answers for her because she “does not yet have the disease”, so told her to take NSAID’s. Though the full force of her immune system on her joints is coming, I have no doubt on that, it just needs a spark to ignite.

And when it does he will most likely give her methotrexate and if needed a biological TNF blocker.

Like all drugs these will give some real benefits but they all come with a cost in the long term and they do not stop the process all together.

And yet, she loved him for giving her a name that is a convenient frame of reference, in latin that means roughly inflamed joints, she ”finally got some answers”.

Give the symptoms/pattern of damage a name, then tell the patient there is no known cause per se and they will likely need to take medication forever, the strength of which is dependent on how much pain they are in.

For me this is the ultimate way to create patient dependency.

I should be clear there is nothing right or wrong about taking medication for these issues.

These medications can be very useful and indeed life changing for many clients in many stages of life with or without other forms of care.

Indeed, I refer out for these medications on occasion for some of my one to one clients dealing with auto-immune issues when we cannot control the damage occurring.

My issue is if you are truly patient centred then the patient should be given all the options, you cannot give informed consent without them, merely consent.

Moreover the idea that there is no known cause and drugs are the only therapy to be used is simply not true.

There is a plethora of evidence that RA is related to the gut microbiome and indeed bacteria all over the body from mouth to urinary tract. (That is likely why she felt better after a massive gut clear out before the colonoscopies).

Immune system detects a infection ( a perceived threat), and attacks it.

Part of the bacteria looks a lot like your cartilage and so get targeted as well, it is called molecular mimicry.

Ultimately, you have a root cause then is triggering your immune system, that is creating damage and symptoms, that get given a label. 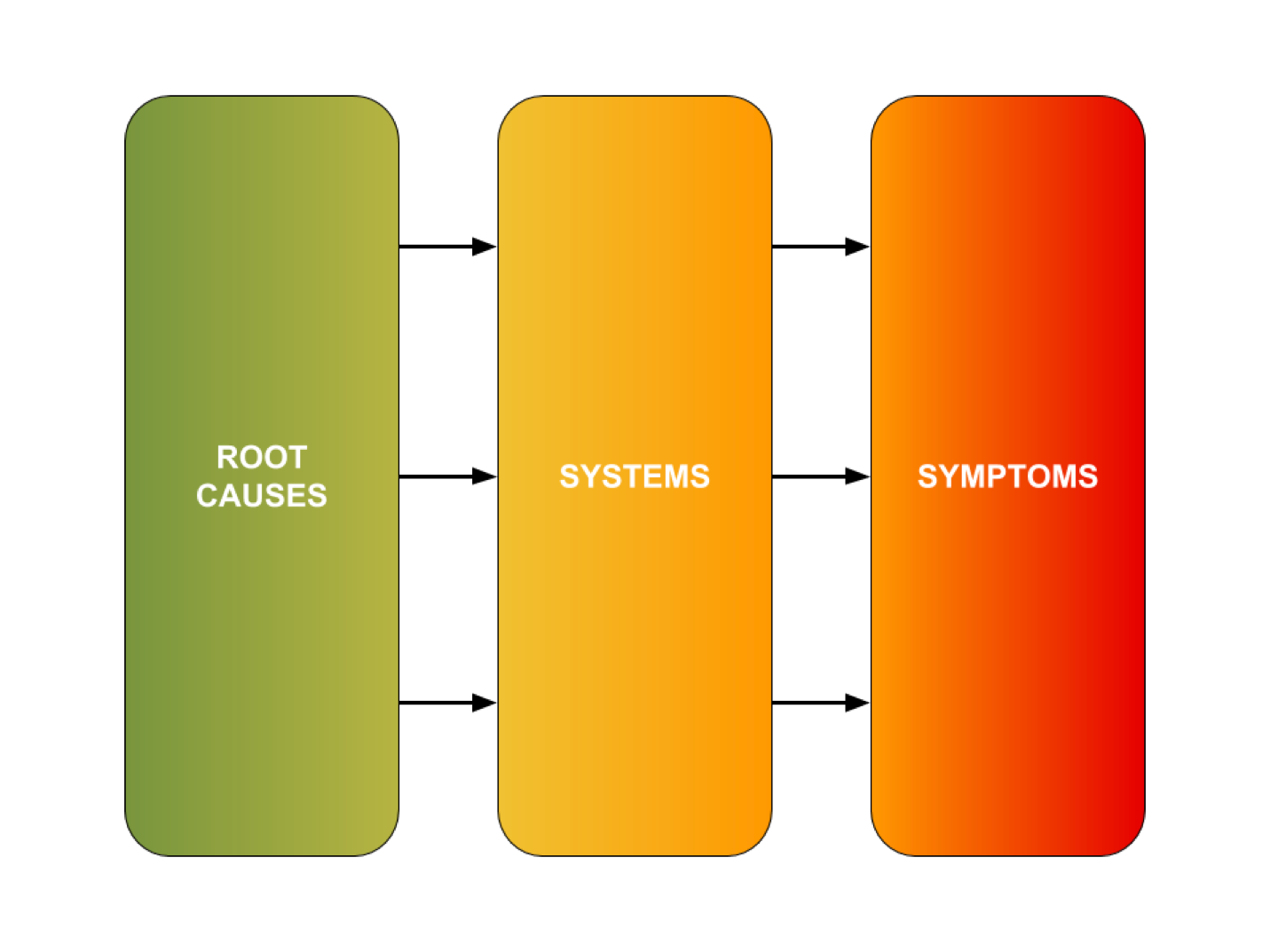 Those symptoms will often be bubbling at a level of inflammation that is below the NHS magic threshold of a CRP 5/7.5 mg/L.

You really want CRP under 1 for reductions in risk for disease and overall mortality. 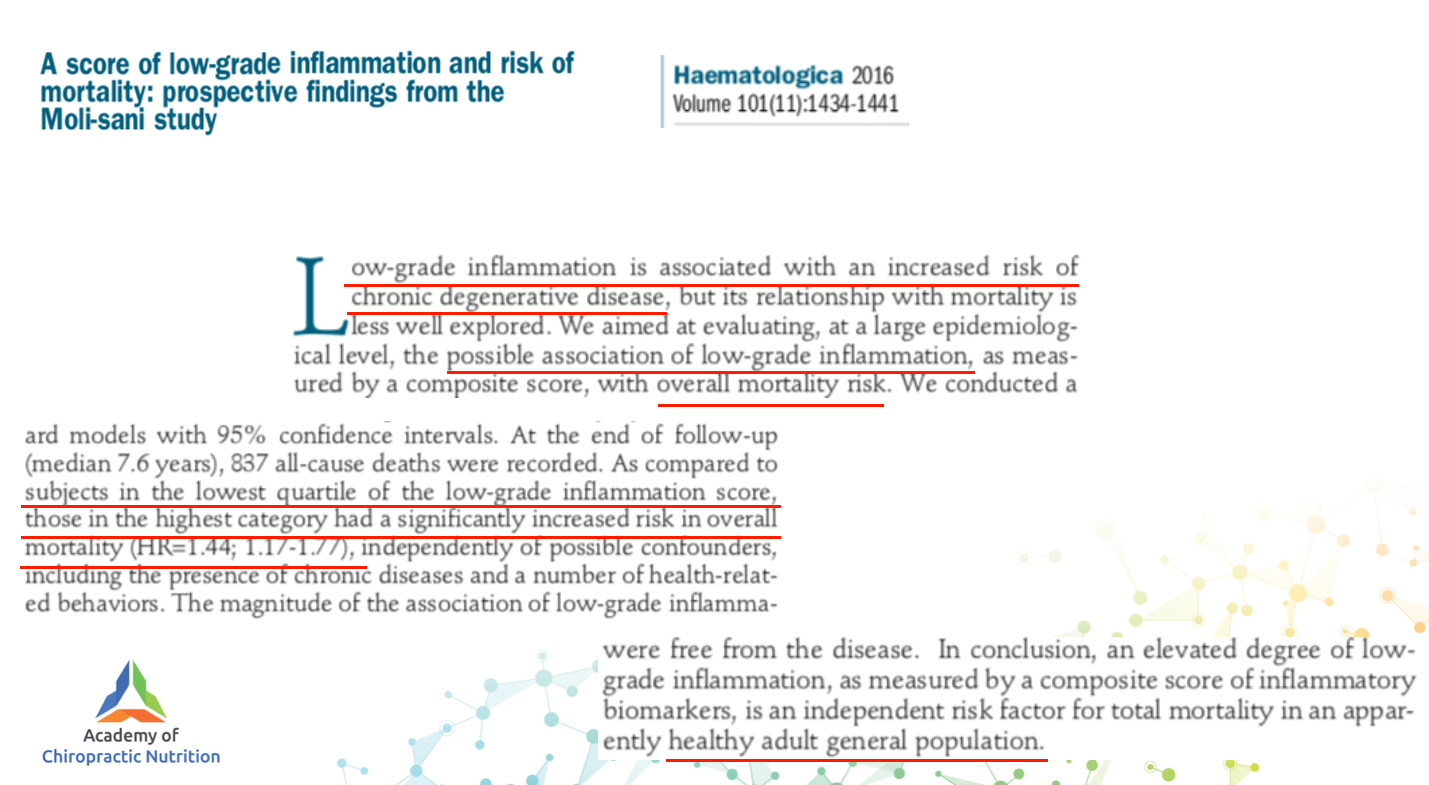 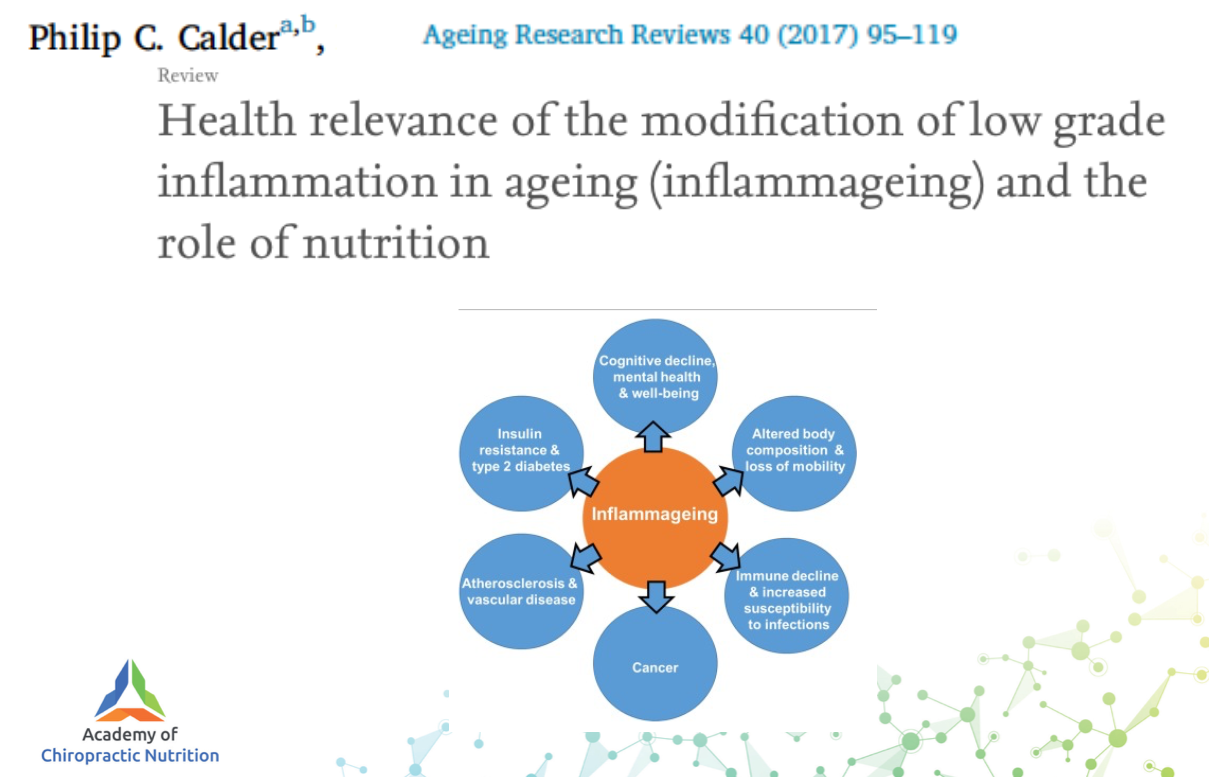 Thus inflammation comes as a spectrum and the symptoms it produces also vary with it. 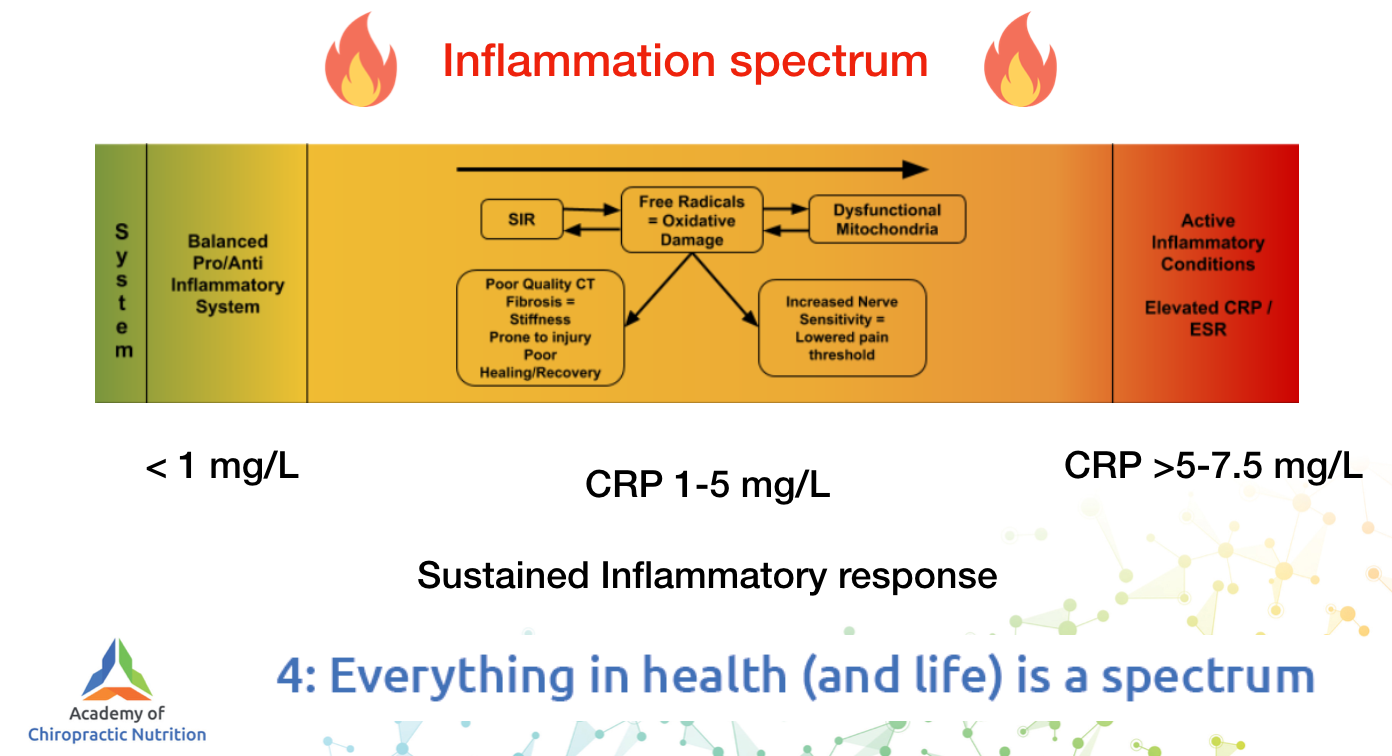 Just because they are not above a CRP of 5/7.5, it does not mean they are not experiencing  a level of inflammation that may lower pain thresholds and create fibrosis in the soft tissues.

Check out the chart below from the course, we break the areas of sustained low grade inflammatory response into phase 1 and 2. 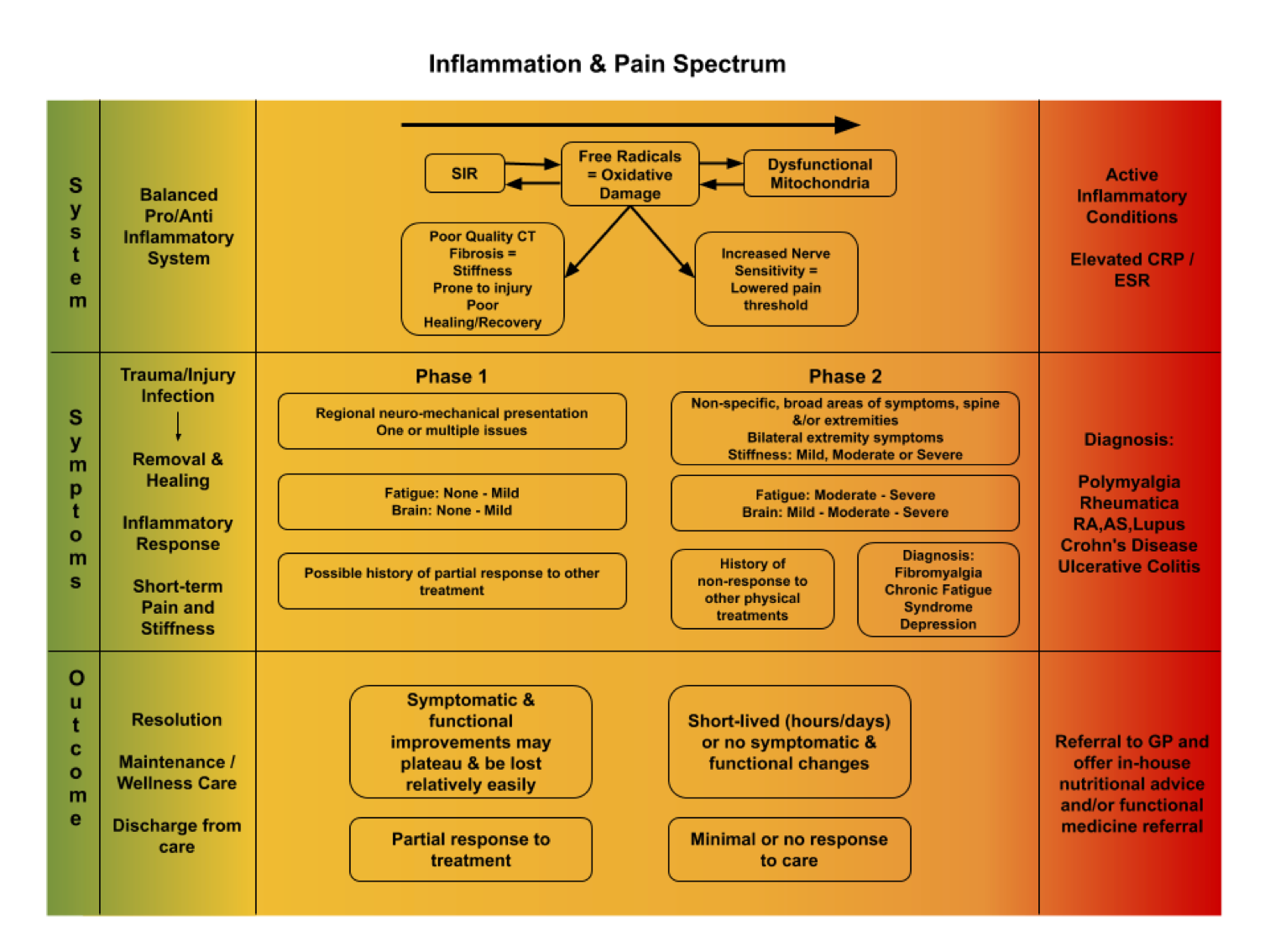 Phase 2 is more easy to spot, as their pain thresholds are pretty low and they have broad, diffuse pain, often bilateral issues in the extremities, obvious fatigue and mood issues.

They often come with previous diagnoses such as fibromyalgia, CFS, depression etc. They also will have seen other manual practitioners of many varieties and have short term symptom relief at best.

Phase 1 is harder to spot as the pain thresholds have dropped and then highlight/exaggerate existing or latent neuro-mechanical dysfunction &/or tissue failure, albeit often multiple areas. 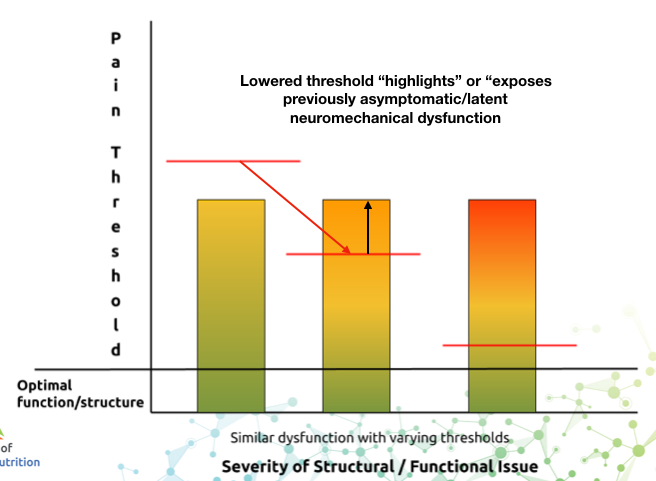 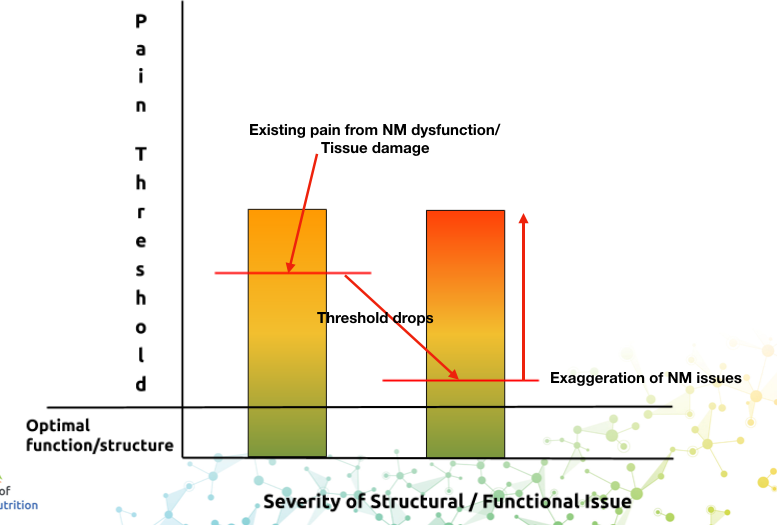 Thus they present regionally and it looks and feels like a regular issue you have treated and resolved before but fails to respond as anticipated.

The clues to these are in the history as per above and also in other symptoms that are all inflammation related.

All from a triggered immune system creating inflammation.

They are not irrelevant or even “co-morbidities” (a term I loathe), they are all symptoms, which are being created by a system (the immune system), which is reacting to a root cause.

Can we always get at these root causes?

Do all patients want to even try?

But by knowing this, by evolving your knowledge to another level, you are offering them solutions and options.

Isn’t that something we should all strive for?

Isn’t that what you would want from a clinican treating your loved ones?

– Always get the patient request their GP blood test results and see if they have a CRP over 1 mg/L.

– Consider non neuro-mechanical symptoms through the lens of inflammation, are these warning signs they may not respond as anticipated?.